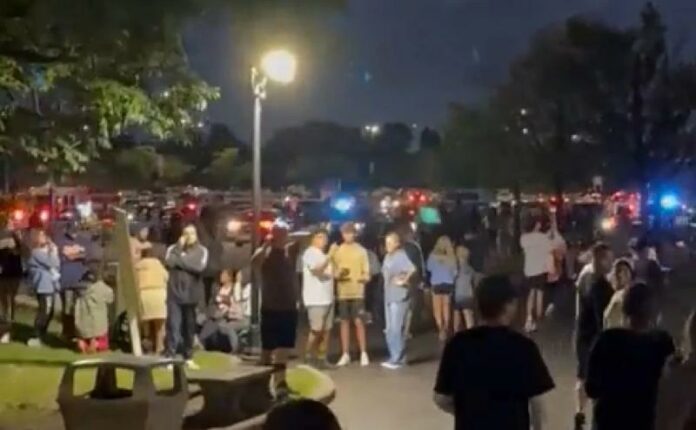 According to preliminary reports, at least three people were injured and EMS is on scene treating victims.

CBS Chicago confirmed the shooting happened in the front entrance parking lot of the theme park.

The gunshots came from a car in the parking lot, according to police.

Several ambulances were called to the theme park.

Shooting at six flags wtf.
The horror of the families and kids hiding in the bathroom with us. I hope nobody experiences this fear ever. Everybody I hope you are safe. #PrayTogether #sixflags #shooting pic.twitter.com/lVyHa4HuQA

Park goers were seen crouching behind a barricade.

Several ambulances have been called to the scene.

The shots came from a single vehicle in the parking lot. The vehicle immediately drove away, according to the communications team at Six Flags.

Two people were taken to the hospital for evaluation and a third person refused treatment.

Video circulating on social media shows park goers crouched down and hiding where they had been in line.

The shooting happened as the park was closing. Witnesses says they saw other parkgoers running after shots were fired.

"I thought there were fireworks right away. Then we saw hundreds of people running," said Charlie Donda. ""It was pretty scary but we are safe."